Concept map is a tool of visualization as well as building connections and relations between the ideas to determine their logic and structure. To create a unique and well-thought-out concept map, it is necessary to know their specifics, types and different uses. 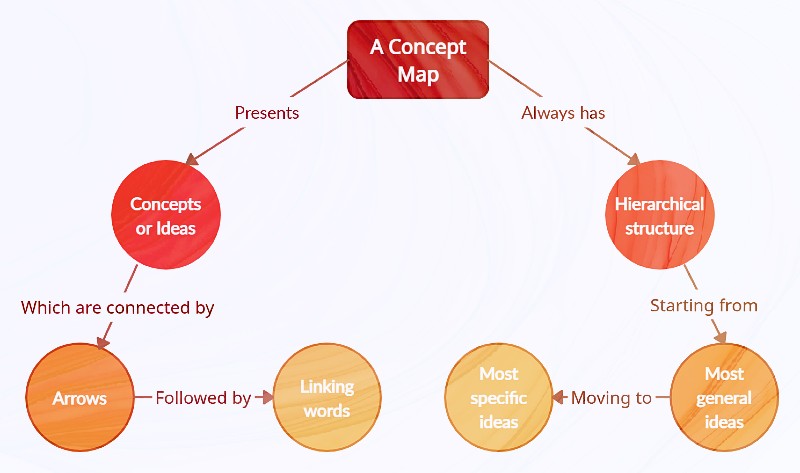 What Is a Concept Map?

A common definition of a concept map presents it as a framework for making the relationship between the ideas visually clear and understandable. Concept mapping implies using lines to connect the boxes with ideas (known as nodes) to demonstrate how they relate to each other. Special branches or cross-links, which contain the words to give explanation of the relationships, connect the nodes.

Difference between a Concept Map and a Mind Map

A concept map is a type of mind maps that ensures the connection between several large-scale ideas with the help of branches. A typical mind map implies brainstorming with a free flow of ideas around a single concept or idea. Mind maps facilitate generation of fresh and innovative ideas prior to their arrangement into a concept map, the structure of which shows the logic of connections and meanings of the involved ideas, which is different from mind mapping.

Why Are Concept Maps Useful?

A concept map gives a clear explanation to the relations between the ideas, and this approach is different from that of a mind map. Thus, concept maps are among the most frequently used tools of discovery and studying new material. Brainstorming typically has no specific starting point; if it is a group method that aims to collect ideas, there is a wide variety of concept maps that suit this goal. It generates a huge number of ideas which have to be organized logically and sorted out. A concept map is a perfect tool for that.

Researchers use concept maps as a follow-up of the brainstorming method to build connections between the collected ideas. It is a great tool for establishing connections between the knowledge you have already acquired and new ideas. Those new relationships in a concept map with its hierarchical structure determine a specific learning approach via arrangement of ideas in their interrelations as well as revealing unknown concepts during the learning process.

What Are Concept Maps Used for?

With a focus on a large-scale project, it is not complicated to define the branching ideas. A concept map is a great tool for completing the tasks B and C instead of completing task A and then task D.

If the number of ideas is huge, but the problem is in their organization and structuring, a concept map is an outstanding tool owing to its hierarchical building. It ensures organization of ideas from wider to the narrower ones.

It is helpful not only for the students but also for CEOs to have the tools of visual learning with the elements that can facilitate understanding of the materials and ideas. It is extremely important when they make an attempt to sell the idea.

It is possible to produce aarge concepts only on the basis of creative ideas, while the members of the team use concept maps to get new effective and creative solutions to various tasks.

How to Build a Concept Map?

Being a valuable exercise, the construction of concept maps is applied in the framework of making hypothesis, brainstorming, looking for effective solutions, acquiring new knowledge, and building relations between the main concepts. For instance, you would like to make your product fit better and that requires an insight into the product market landscape. What would be the steps one has to take to build the required concept map?

Which problems do you intend to address with the help of a concept map? For instance, you may ask a question like, Which product fit would my product have? After the question, you have to do visualization of the idea, concentrating on the asked question.

Brainstorming deals mostly with generating ideas with no definite specialization or structuring. It aims to produce a list of all the ideas that come to your mind. There is a focus question asked to start the process and then you merely collect all the generated questions, comments, ideas, and solutions. Have a look at some professional know-how tips on effective brainstorming.

Your product fit can have a stage of brainstorming with the key concepts of competitors, minimum viable product, industry standards, pain points, market factors, user experience, customer value, and so on.

There should be a specific central theme around which you would build a concept map to capture all the ideas from the stage of brainstorming with some generalized concept. For instance, it may be the idea of product fit solutions. It is possible to amend the central idea in the process of concept mapping. It is an exercise of flexible nature that reveals new approaches, relationships, and ideas.

It is essential to proceed to identification of relations between the brainstormed ideas built on the basis of the hierarchical and specificity principles. You should mention both the general ideas and concepts and particular solutions. The concepts move further from the center with higher level of specification. It is time to do the grouping of the ideas only. It is not the stage for building connections between the ideas yet.

You begin with the key idea to go to the nodes nearby and add the related ideas. If there are evident connections between the ideas, you have to use the arrows or linking words between the boxes. For instance, it will look like this,

Examples of a Concept Map

The forms of concept maps can differ in accordance with the process they are involved in. The aim of every concept map is to specify relations between the key ideas with branches, but the method of concept map organization shows different connections and generates new knowledge. A concept map can take the following forms:

A concept is presented in a linear manner with the use of flow charts. They show the movement from top to the bottom or from the left to the right, not in outward spiraling direction. A flow chart concept map can facilitate understanding of the product roadmaps, UX flows, or user journeys.

The pattern of braches in a cascade of a concept map is radial with cascading in the outward direction. The amount of details increases with further movement from the central idea.

They resemble a waterfall map or a genealogical tree with a cascade of ideas that go from the top to the bottom.

They present the key constituent parts of the system with the interrelations between the parts shown with the connecting arrows. A system map has a web-like structure without any outward spiral.