Rules of Academic Use of Pronouns: Examples and Tips.

Pronouns can be defined as a part of speech that is used to substitute for nouns to avoid the redundant usage of the latter ones. Similar to nouns, pronouns may denote both people and inanimate objects when they are specified (for example, “I,” “we,” “it,” “his,” “her,” “this”). Also, this part of speech can refer to unspecified animate and inanimate objects (for example, “anyone,” “somebody,” “some,” “every”, etc). 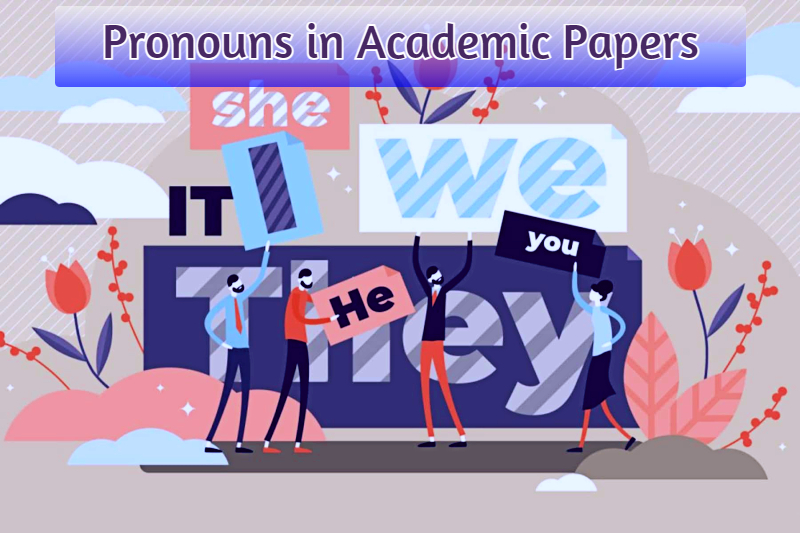 It is interesting that when you write an academic paper, your field of study may influence the choice of pronouns. You can use first-person pronouns such as “I” and “we” in accordance with the specific instructions of your educational sphere. However, sometimes, you should avoid using second-person pronouns such as “you” and “yours”. Yet, third-person pronouns, such as “they”, “he”, and “she” can be reasonably applied in academic writing, but it is essential to refrain from a gender bias.

The noun a pronoun denotes is called an antecedent. Typically, one must mention the antecedent in a sentence before its substitute pronoun, but it can also appear in a subsequent sentence part, which further explains the role of the subject.

Correct: Philip did not come to the meeting on time because he got on a wrong train.

Correct: After they were having heated debates, the participants shared the prizes.

The main tip here is to make an explicit antecedent. A noun should be used if a sentence with a pronoun gives a sense of vagueness or incompleteness.

Incorrect: After John went to a job interview and passed his qualification test, it was properly assessed by the committee.

This sentence reflects ambiguity, as there is a contextual confusion whether “it” implies the interview or the qualification test.

Correct: After John went to a job interview and passed his qualification test, the test was properly assessed by the committee.

“I” and “We”: Authorly First-Person Pronouns

There have been ongoing discussions in the academic field regarding the use of first-person pronouns, which refer to authors. Although conventionally the first person is not used in scholarly spheres, this impersonal tone is still acceptable when showing the exact authorship.

If in doubt about whether you should use the first person, check with your teacher or supervisor.

The employment of first-person pronouns in research papers

Even though the usage of first-person pronouns is allowed in academic writing, they should not be superfluous. Make sure you apply them in the most suitable instances of the ideas’ expression.

Pay attention to the employment of the plural first-person pronouns, such as “we”/ “our”. Use them only when your work has co-authors. If you are the only author, then apply “I” / “my” instead.

The main rules of the first-person pronoun usage:

Instances when first-person pronouns should be avoided

There are three major methods to avoid first-person pronouns if it is a part of your instructions.

The approaches highlighted above have both pros and cons. You might know a common request not to use Passive Voice often. Thus, only when you need to omit a first-person pronoun, use a Passive Voice sentence. Be careful not to create a number of dangling modifiers that distort the meaning of the sentences.

Note that particular kinds of scholarly writing always accept the usage of first-person pronouns. They are frequently met in such compositions as personal statements.

Time to Get Rid of the Editorial “We”

We do not use the first-person pronoun in its plural form when referring to people. While “we” is acceptable in newspaper editorials aimed to express opinions, which is shared between many individuals, it is not very beneficial to use it in academic writing. When you compose a research paper, do not subject to generalizations.

Incorrect: When we cooperate in creative environments, our teamwork is much more effective.

Correct: When employees cooperate in creative environments, their teamwork is much more effective.

However, it depends on the context you would like to embody. It is appropriate to use “we” pronoun when you are focused on sharing the experience of cooperation within a certain group you are also a part of. The only thing you should keep in mind is clarity of all your references.

Incorrect: It is fundamental to assess the scope of their acceptance of the new professors.

Correct: It is fundamental for educators to assess the scope of students´ acceptance of the new professors.

Balanced Employment of Second-Person Pronouns (“You” and “One”)

You could probably notice the instances of the usage of “you” pronoun in academic papers. However, it is rarely regarded as appropriate. Therefore, ask your professor whether it is suitable to use “you” or substitute it with “one”, which is an impersonal pronoun.

Likely incorrect: In order to obtain a qualification of a psychotherapist, you must study for two years minimum.

Always correct: In order to obtain a qualification of a psychotherapist, one must study for two years minimum.

“He,” “She,” “They”: Mastering Third-Person Pronouns in Terms of Gender Neutrality

The problem of using third-person singular pronouns in the English language is that they cannot be gender-neutral. It is highly important to sound unbiased in any type of academic writing. Hence, you will unlikely come across the pronouns, such as “she”/”her,” and “he”/”him” in a scholarly publication, research paper, and/or a style guide.

In older writing, you will often see masculine pronouns (“he,” “him”) and nouns (“mankind,” “firemen”) used as the universal or neutral. This is now considered outdated and biased.

If you see such pronouns in an article, then high chances are that the work is outdated. It does not adhere to the standards of modern academic composition. It is also ambiguous to use both feminine and masculine pronouns. Even if you want to emphasize the gender, it is better to avoid such constructions for the sake of linguistic neutrality.

If you have to mention people of unidentified gender, it is convenient to use such pronouns as “they”/”them”/”their”. Pay attention to the fact that a pronoun “they” has been a substitute of a singular pronoun when you write about something in general. Rules about it can be found in MLA and APA guidelines.

A compelling tip: not to overuse the singular “they,” one can transform the sentence subject into a plural form.

Incorrect: When a person gains weight, he becomes on the verge of self-esteem decline.

Correct: When a person gains weight, they become on the verge of self-esteem decline.

Correct: When people gain weight, they become on the verge of self-esteem decline.

However, many writers make a common mistake when they think that basically every pronoun can be substituted with “they” for the sake of gender-neutral data presentation. Reread your sentence to make sure it does not sound vague. If “they”-pronoun surely does not fit in your sentence, change its structure or name your subject directly.

The main secret is in the clarity of the expressed thought. If one analyzes the primary sentence, the ambiguity lies in the fact that it is not obvious whether the used pronoun “they” is related to the student, the teacher, or both of them.

Incorrect: If the teacher gives a low mark for the assigned project, they will have to improve their teamwork skills.

Correct: If the teacher gives a low mark for the assigned project, the students will have to improve their teamwork skills.

If one addresses a particular person, then it is right to apply such pronouns, which can identify this individual. In other words, you must use possessive pronouns, such as “her”, “his”, and “their”, which are correlated both with the revealed gender and the word´s singular or plural form.

Correct: Young writers were discussing their newly written books: Leo told about his poetry collection, Andrea provided a glimpse into her debut novel, Kowalski sisters revealed the plot of their co-authored short tales.

One more essential rule regarding pronouns is their consistency. If you use a first-person pronoun, then you should not proceed with writing third-person pronouns.

Incorrect: The scholars prepared 20 lectures on environmental contamination, and our findings showed that the depletion of resources is the main problem.

Correct: We prepared 20 lectures on environmental contamination, and our findings showed that the depletion of resources is the main problem.

Correct: The scholars prepared 20 lectures on environmental contamination, and the findings showed that the depletion of resources is the main problem.

“This,” “That,” “These,” “Those”: The Usage of Demonstrative Pronouns

Demonstrative pronouns or demonstratives are aimed at singling out a subject in the presented context. All pronouns such as “this,” “that,” “these” and “those” are used quite frequently in academic writing.

The object of reference should be distinct, and demonstrative pronouns help to elucidate the necessary meaning. A demonstrative is typically followed by a noun that explicates the main idea.

Incorrect: There is a colossal gap of the information perception regarding War in Ukraine between the fact-oriented Ukrainians and brainwashed Russians. This encourages further investigation of relevant evidence by authoritative international communities.

Correct: There is a colossal gap of the information perception regarding War in Ukraine between the fact-oriented Ukrainians and brainwashed Russians. This discrepancy of outlooks encourages further investigation of relevant evidence by authoritative international communities.