Every decent research has a hypothesis, which embodies an “insightful presumption” about the outcomes of your scientific experiments or scholarly investigations. This is a specific predicting statement. Although a hypothesis is always concise and subject-focused, it is not that simple to express it clearly and reasonably. Logically, being a quintessential part of the chosen scientific work, it should be crafted meticulously. 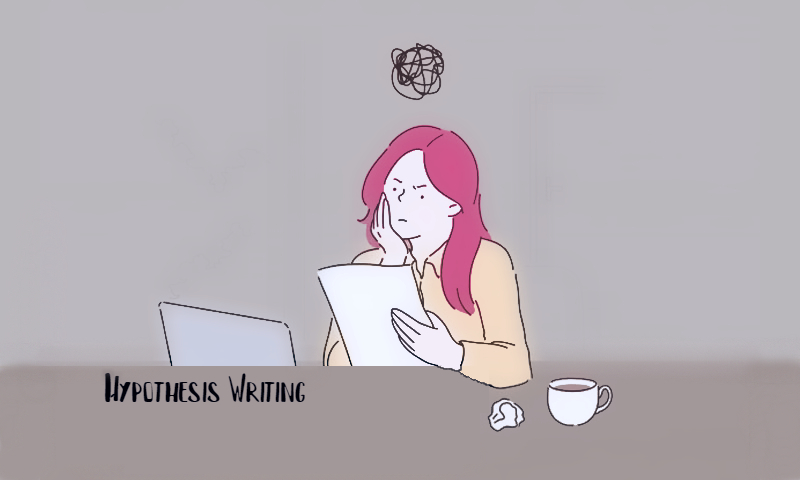 If you have never written a hypothesis before to make your academic paper a full-fledged investigation, you need to learn the fundamental steps of hypothesis writing. Besides, it is important to get acquainted with versatile types of hypotheses for varying academic purposes.

The Definition of a Hypothesis

Initially, before creating a good hypothesis, you have to know what a scientific method is. Basically, it is an essential empirical method, which helps you obtain new knowledge and analyze a developed comprehension of a specific issue. Every scientific method needs to have a hypothesis, which should be determined at its primary stage. This educated guess or insightful presumption is interrelated with your observations. By observing the implementation of a certain concept or by conducting experimental manipulations, you get the results, which influence the outcomes of your research.

We can give a simple example, such as watering a tree. If you water a tree every day, you can predict that it will grow faster. Thus, your hypothesis in this case is: “trees grow faster if you water them regularly.” It is also easy to conduct some experiments to prove that your hypothesis is true. For instance, you can plant two young trees. Water one tree every two days and water another tree once a week. You will likely see that the most-watered tree grows faster. The differences in growth of the two trees will constitute your results.

Such an example shows that a hypothesis often focuses on variables, or the elements under investigation. Different events, concepts, objects, and other observable things, which can become your variables.

As such, the major purpose of hypothesis generation is to regulate the course and arrangement of the research methods you would select. Therefore, a decently crafted hypothesis forms the core essence of your scholarly investigation. It is significant to mention whether your hypothetical statement is true or false. You can elucidate it in your introductory part so that your readers know the potential outcomes.

Although the nature of your investigation may vary, there are 7 predominant types of hypotheses. Sometimes, your hypothesis will reflect a mix of several categories. Such a fusion will make your educated guess more unique.

This may be the most typical hypothesis type. It predetermines the unsophisticated connection between the pair of variables: independent and dependent ones.

If you miss the deadline, then you will get penalized.

If you practice French every day, you will speak more fluently in a year.

Its complexity lies in the interrelation between more than two variables. For instance, the relation can be between two dependent variables and independent, or the other way round.

Individuals who (1) go through much stress and (2) have a genetic predisposition to mental illnesses are more likely to suffer from panic attacks.

This is a specific kind of hypothesis, also called as H0, which is devoid of the connection between variables.

Trees will grow in the same way if you water them with tap water or bottled water.

Highly intuitive people do not tend to win lotteries more often than other people, who rely on mere luck.

Trees will grow better if you nurture them using infused water rather than tap water.

Spiritual mediums have the potential to win lotteries more frequently than people with ordinary intuitive skills.

This type of hypothesis is grounded on the logical connotation and deductive methods. It means that by making such a hypothesis you do not have to present evidence or any precise data.

A human settlement on Mars would have to create an abundance of greenhouses in separately constructed buildings to enhance the oxygen consumption for its dwellers.

All the extinct animals who had sharp teeth were predators.

A hypothesis interrelated with an empirical method is also called “working hypothesis”. You would use such a hypothesis if you relied on the exact evidence-based data.

You will get rid of a range of harmful bacteria if you wash your hands with water and soap regularly.

Returning clients will make use of the same discounts even if the order price will become higher.

A hypothesis based on statistics often involves creating sample of a population. It can also be based on statistical data of some surveys. The statistical evidence you obtain helps you get the precise results about the entire communities or groups under investigation. Please note: you do not have to examine and test every statistical element. It is more beneficial to rely on the pre-existing data and compare it with the recent findings.

According to recent gender statistics of birth rates in Asia, there were 10% more female newborns than male ones.

8% of the global population has blue eyes.

Luckily, you can apply similar guidelines to any kind of hypothesis that would be suitable for your investigation. Pay attention to the following 5 features, which will make your hypotheses genuine and meaningful:

Yon can remember that a cause-and-effect relationship is always present in a hypothetical statement. Usually, one variable serves as a transforming factor for another variable. Only in case of a null hypothesis, there is a “null effect” despite the initial cause. You can also remember it as an “if-then” statement: The occurrence of one variable leads to the alteration of another interrelated or semi-related variable.

Prediction that can be tested

It may be difficult to test your hypotheses only in rare cases. Usually, every hypothetical statement is subject to testing. However, if you produce a logical hypothesis, there is no means of checking its implementation in practice. Yet, it is advisable to try to test or carry out an experiment with your hypothesis before making it the fundamental part of your research method.

You should elucidate the chosen variables to your readers to make them gain some insights on the overall research purpose. It is not necessary to state which variable is dependent or independent, but you should implement them in such a way that your audience discerns them.

It is easy to immerse in complicated expression of thoughts when carrying out quite a profound investigation. Despite the complexity of your topic, do your best to make an easy-flowing hypothesis, which clearly defines the necessary contextual connections. An ambiguous hypothesis will only confuse your readers. If it seems that your language is too sophisticated, check it via readability apps or read your hypothesis aloud to your friend or colleague.

Academic research is entwined with strict adherence to ethical experiments and expressions of opinions. Thus, even if your topic explores a controversial burning issue, you should be very careful with disputed or offensive experiments. The ethics of your work determines its general credibility.

Irrefutable Ways of a Hypothesis Writing

1. Do not stop asking questions

In case with hypothesis writing, there is no such thing as excessive curiosity. You definitely know that some of the greatest scientific experiments and achievements are tightly related to curiosity. If you start asking questions about your surroundings, you will find some unexpected answers. There are so many factors, which arise due to special causes. Your task is to determine those causes and reveal the ensuing factors. It is also preferable to choose research topics, which spark your interest right from the start.

Although you can discover the subject matter anew, some previous background on the topic is highly important. Sometimes, you have to balance between the background data and the newly obtained information. In some cases, your focus should be on an in-depth scrutiny of resources. In other instances, you should rely on your independent experiments more. At this stage, your hypothesis may remain unproved. The preliminary research primarily deals with data collection.

4. Discover the usefulness of “if-then” statements

At the initial stages of hypothesis development, or when you lack some research writing experience, it is preferable to use a sentence structure in an “if-then” format. For instance: if I eat vitamins in winter, then I will feel more energized. Of course, in some cases, “if-then” format may not be applicable, especially when your hypothesis consists of multiple variables. Yet, for ordinary research papers where the cause-and-effect relationship is evident, it is beneficial to form your statement around “if” and “then”.

5. A hypothesis cannot exist without some prior data

Any scientific investigation should have a meaningful conclusion, and your hypothesis should unveil its grounding elements. Also, remember that you should start experimenting with the subject matter after your hypothesis is developed. Data collection is one of the major steps to back your hypothesis with evidence. Even if you make up a logical hypothesis, there can be some preliminary deductive assumptions by other scholars. Remember that disproving your hypothesis in the conclusion is not a mistake as well. It still reflects experimental methods you used, which are integral aspects of your research.